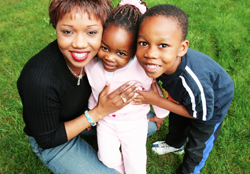 Gloria* came to Family Service of the Piedmont’s Consumer Credit Counseling Service (CCCS) for First-time Homebuyer Counseling. It wasn’t until CCCS began looking into her finances that it was discovered Gloria had had her identity stolen. An identity thief had taken out a number of loans and credit cards in her name as well as a North Carolina Driver’s License.

The first step that Gloria had to take was filing a Police Report. A fraud alert was placed on her credit report, so that if the identity thief attempted to use her account again it would be flagged and go on to be investigated. Then, her Consumer Credit Counselor helped dispute the credit fraud by sending a multitude of information to the credit bureau. In the end, all of the fraudulent accounts were removed from Gloria’s record.

Gloria is still in the process of completing the First-time Homebuyers program. She is greatly appreciative to CCCS for helping dispute the fraud and help her move towards owning her first home in the near future.

Want to help?  Click here to donate and support consumer credit counseling and other programs of Family Service. Thank you!