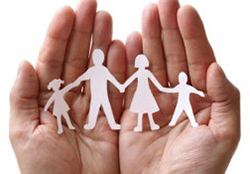 From Trauma to Healing

“When my sister went missing, her husband kept telling everyone she had taken off,” says Tina*. “She would typically talk to our mother on a daily basis. When we hadn’t heard a word from her in over a week, we knew something wasn’t right. We informed the police and waited for any word about her whereabouts.”

Tina’s worst fears became a reality when detectives arrived at her house early one morning. Her sister had been brutally murdered. Her remains had been found, and her husband was in jail charged with the crime.

The Police Department contacted Family Service of the Piedmont’s Children’s Advocacy Center (CAC) to set up an emergency forensic interview for her sister’s children to see if they had witnessed the murder. It quickly became apparent that the children, ages 6 and 9, were unaware that their mother was dead and their father was responsible. Sue Spidell, the agency’s Director of Family Support Services, was brought in to break the news and offer support to the family. “It took a while for it to sink in,” Spidell remembers. “I’ll never forget the son just holding on to the table in shock, like he was going to get blown away.”

Both children were taken in by their aunt Tina and her husband, and started individual therapy right away. The children were guarded and unsure of their future, angry with what had happened and out of touch with their emotions. Slowly, through therapy, the children began to identify their feelings and understand how those feelings affected their behavior.

It soon became apparent that the whole family could benefit from therapy. “I never had children, so getting two kids at 45 years old was a new experience,” Tina explains. “I had no idea how to raise kids. The stress of the entire situation put a real strain on my marriage.”

A Family Service therapist began offering in-home, bi-weekly family counseling sessions, helping the children and adults learn ways to communicate with each other, to discipline age-appropriately, and to adjust to the new family dynamics. Therapy began to address the trauma each member of the family had suffered, and to heal the cracks in their personal relationships.

“I don’t think I would have been able to do this if it weren’t for Family Service,” Tina says. “My husband and I couldn’t have gotten through it without our therapist. Every time I needed to know something, they were there. They helped us every step of the way.”

When their mother’s murder case was resolved within the legal system, the whole family took part in a counseling session to inform the children of the outcome and talk about their feelings. During this session, recalls Spidell, it became obvious that true attachment and bonding had occurred within the family. “The oldest child climbed onto uncle’s lap while the youngest quickly climbed onto Tina’s,” she says. “Both children found the comfort they needed while having this difficult conversation, and aunt and uncle responded naturally in very loving, nurturing ways, re-assuring the children of their love and commitment to them.”

Having suffered through the most horrible distress and loss, the new family had come together to give the children the safe and healthy environment they deserve.

Want to help?  Click here to donate and support the CAC and other programs of Family Service. Thank you!