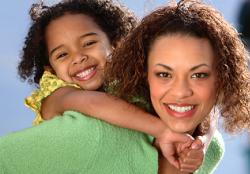 Angel* was a young mother involved in an abusive relationship, when she became pregnant a second time. “At that time my chances of being successful in life, I was told, were going to drop drastically,” she remembers. “I was told this by family members. My dad told me I had to leave his house because I was pregnant again. So I was out on my own for the first time, with one child, pregnant, with a guy who was abusive.”

A few weeks after the baby was born, Angel and her partner were involved in an altercation and neighbors called the police. “That time I’d just had enough,” she says. “I’d already put one child through it. I said, there is no way I will let another child see what my oldest has seen.” So Angel called Family Service of the Piedmont’s 24-Hour Crisis Line for victims of domestic violence and sexual assault. “I got a lot of good information from them,” she says. “Then I went down and filed the charges, took out a restraining order.” And she put an end to the relationship with her abusive boyfriend.

Family Service’s victim advocates guided and supported Angel throughout the court process. She began attending the agency’s Crossroads peer support group for survivors of domestic violence. “I thought that was something I needed to do for myself,” she says. “I have not stopped coming since then. Just to remind myself not to go back there – it’s very easy to fall back into old ways.”
Angel also received individual counseling at Family Service. “That’s where I can talk one-on-one about my own problems,” she says. “If I need something, or if I don’t want the whole group to know something, then I can share it in counseling.” When her daughter was about five, she began counseling with a Family Service child therapist as well. “She just loved it,” Angel says. “She doesn’t like to talk a whole lot about stuff, so it was a way for her to be able to express herself, through drawings, or to talk about emotions and feelings. I think even as adults, it’s hard for us to pinpoint emotions and what we’re feeling. So that’s helped us both a lot.” In addition, Angel has taken advantage of the agency’s Consumer Credit Counseling Service to receive financial advice.

Above all, Angel says, her experience has enabled her to regain her sense of self. “After being controlled for so long, you kind of lose your own identity,” she says. “The biggest thing is just finding myself, who I am, what I like to do.” Angel is now enrolled full time in school and a year away from graduation, which she says is thanks to the positive encouragement she found at Family Service. “I never thought I could go back to school with two kids. But there is life after all of this. There’s life after domestic violence.”
Angel proudly shows her new tattoo, a rose illustrating domestic violence. “If people ask me about it, I’ll tell them,” she says. “And I always refer them here. I definitely could not have done it without help from Family Service.”

Want to help?  Click here to donate and support victim advocacy and other programs of Family Service. Thank you!

Living Life to the Fullest »
« Perseverance Pays Off